For our next edition of all the sins, we’re asking artists to explore history through their art. It could be a key moment on the world stage or a tiny detail from your childhood. Either way, we want to see art that moves beyond simple fact telling and, instead, blends knowledge with imagination to create something new. We’re looking for authenticity rather than accuracy. As always, we hope our essay will get you thinking about our theme in new ways.

You may also like to try your hand at a new written form called a ‘centena’. Devised by author John Simmons for a literary project Sinéad and I are both involved in, the form is precisely 100 words, with the first and last three words repeating. You can find out more about the project and the form in John’s interview at the end.

But truth doesn’t automatically mean fact – after all, an historical novelist is not the same thing as an historian, as Tudor expert John Guy so beautifully explained at the 2017 Hay Festival. On the publication of Wolf Hall – Hilary Mantel’s fictional account of the life of Thomas Cromwell – Guy received multiple requests to write about the novel’s accuracy. He turned them all down, telling his Hay audience, “When you are in a world of the novel, a world of theatre, you tell a lie to tell the truth.”

Of course, almost all historical fiction starts with some sort of factual research, what novelist Philippa Gregory describes as the backbone of any good historical fiction. Speaking to History Extra, Gregory says her job is ‘to write coherent, well-put-together novels that just happen to be set in the accurately researched past.’ The key, she argues, is to wear that research as lightly as possible.

However, records – assuming they still exist – will only get you so far. Any artist who chooses to use history as a backdrop or bring an historical figure to life will inevitably face decisions about how best to blend fact with imagination, in order to tell the truth. In Cromwell’s case, few documents remain and, as novelist C.J Sansom explains in an interview with The Guardian, Henry VIII’s chief minister from 1532 to 1540 has ‘been controversial ever since he had his head cut off’ and is, therefore, ‘ripe for interpretation’.

Indeed, the interpretation is half the pleasure of being an historical fiction writer in the first place and one author’s truth is not necessarily another’s. As a consequence, Sansom describes his Cromwell as ‘much darker and more brutal’ than Mantel’s version, despite the fact that they probably used the same source documents to inform their thinking.

In Kazuo Ishiguro’s case, a lack of evidence about the daily life of servants meant he had no choice but to make an educated guess when writing The Remains of the Day. In an interview with The Paris Review in 2008, Ishiguro says he was ‘surprised to find out how little there was about servants written by servants […] So most of the stuff […] about the rituals of being a servant was made up.’ The guess paid off – Ishiguro’s ability to capture a literary truthfulness, if not an historical fact, won him the 1989 Booker Prize for his ‘compelling portrait of the perfect English butler’.

For some historical authors, the desire to ‘write what you know to be true’ is intricately linked to the need to explore that which you don’t fully understand. For example, Pat Barker wrote her First World War Regeneration trilogy, because of an absence. Speaking to Foyles bookshop, Barker explains that her grandfather and stepfather had been left terribly scarred – physically and mentally – by the war, but that neither of them spoke of their experiences. She says: ‘…there were wounds and there was silence and that silence invited imaginative exploration.’

That exploration has certainly driven a lot of my own writing. I never intended to be an historical fiction writer but over the past few years, I found myself writing a novel set during the Blitz as a result of the ultimate silence – death. I became fascinated by the different roles that certain family members had played in the Second World War but had no means of asking questions. So, I did my research and used my imagination to fill in the gaps.

This has happened again, this year, thanks to a literary project that Sinéad and I are both involved in. Created by John Simmons – himself an author of two historical novels – Armistice 100 Days is a partnership between the writing organisation 26 and Imperial War Museums that has brought together 100 writers to write 100 ‘centenas’, each inspired by someone who was alive at the time the First World War broke out (see below for more from John on this project and why he created a brand new literary form).

My centena inspiration is my great-grandfather Horace Sumner, a man I never met and of whom I know very little. What I do know is this: he was a religious man who served on three separate hospital ships; we believe he was a member of the St John’s Ambulance before the war (the title of my centena is taken from their motto); and he was probably a pacifist. We’re almost certain – thanks to a precious copy of his service record – that he tended the naval wounded at the Battle of Jutland. And according to my Gran he once stopped a patient from throwing himself into the sea.

It was this sliver of a story that I wanted to explore. There are so many tantalising gaps – what mental state must the other man have been in? How did my great-grandfather approach him? Did they talk or was it simply a gut reaction? Did it even happen?

This last question is the one that has plagued me most, largely because there are so many other questions behind it, such as did this man survive the rest of the war and if so what became of him?

I can never truly know the answer to any of these questions, though, since my great-grandfather died many years before I was born, and my Gran is now 95 and of fading memory. There is only silence. And interpretation. And imaginative exploration. And it may well be that in writing this moment into existence I have told a lie to tell a truth. 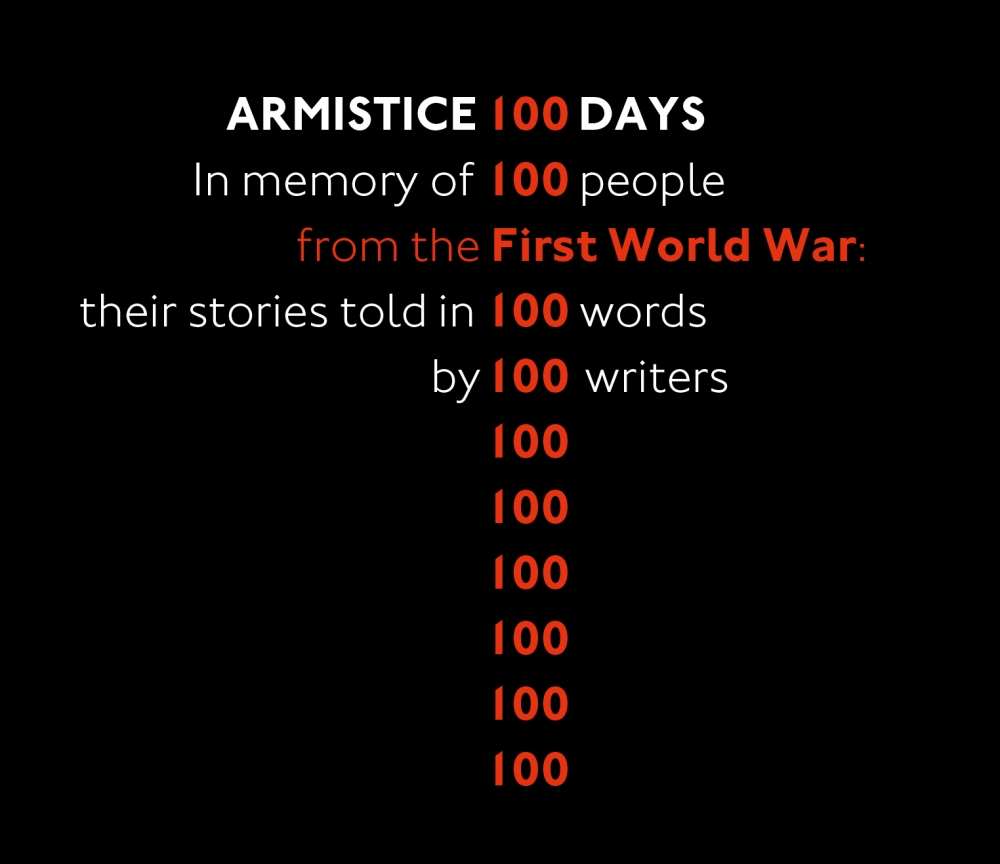 Your latest novel The Good Messenger is set before and after the First World War, with Armistice a central chapter. What drew you to this moment in history?
I’ve always read a lot about the First World War, watched films and TV programmes. A lot of it has portrayed the war through fiction based on reality – Pat Barker, Sebastian Faulks, Ford Madox Ford. Reading the War Poets and watching the monumental series The Great War were formative experiences in my teenage years.

All this left me with a feeling of ‘what a waste’. I’d visited France and Belgium to see sites and cemeteries, including the one in Flanders where my grandad was buried. He was killed in 1917, leaving my Nan to bring up my mum and aunt who were babies at the time. So there is a very personal element for me.

With all this stored inside me, I started to write a novel set either side of the First World War. I wondered: what would it have been like? I imagined the outpouring of emotion but also the mixed feelings. It must have been one of the most emotional days in human history. Write about that – there’s a challenge.

You created a new literary form for the 26/IWM Armistice project – the centena – what was your thinking behind that?
Having thought about Armistice, it was clear that it needed its own response that would respect the people who had been in the war. We needed to create memorials in words to 100 people. So words like remembrance, dignity, respect ran through my thinking. It seemed right to honour the people by creating a form that was unique – and that acknowledged the ‘centenary’ aspect, 100 years since that Armistice was declared. One hundred words – of course – a ‘centena’.

I also thought it needed something more than just the number, and the circularity of the extra idea – the last three words echoing the opening three words – seemed right to reflect the fact that Armistice concluded a war that had begun four years earlier. There could be something ritualistic, spiritual even, in that repetition – a conclusion, a pause, a time for reflection on what had gone before.

The centena is not the first form you developed for 26 projects – there’s also the 62-word sestude. What is it about writing constraints that appeals to you?
Constraints liberate creativity. I really believe that, although it sounds as if the opposite should be true. But I’ve tested this theory through my own writing and through countless exercises I’ve created to help people write. These constraints might involve a word count, a particular form, the use of seemingly artificial restrictions on words, syllables, beginnings or endings. Challenged in this way the creative part of the brain responds by finding a way around the obstacle. It might not always be the creative solution, but it does guarantee a different, unexpected perspective that makes writing a pleasure. We need writing to be playful and surprising – for the writer and the reader.

Has anything surprised you about this project?
I’m not really surprised by the enthusiasm of our writers, nor by the quality of their writing, because I’ve seen plenty of that in previous projects. But there is something deeper and more personal this time, a greater feeling of owing it to the memories of these people to write the words that will truly respect the lives of the subjects. And along the way there have been some of those moments of serendipity and surprise – I think my favourite was hearing that Angus Grundy had chosen Archduke Ferdinand’s driver to write about. That really was perfect for the first centena. The war began with a wrong turn.

Armistice 100 Days has been running since 5 August and you can continue to follow it until 12 November. The centenas will also be published in a book which is helping to raise funds for War Child, the charity that supports children affected by war.

Look out for Sinéad’s centena, which will be published on 6 October.

26 is a membership organisation made up of people who share a love of words, and believe their potential is hugely underestimated. Other word lovers welcome.

John’s next novel The Good Messenger is published in September.