It’s the middle of January and, as you would expect of a typical English winter’s day, the sky is pebble-grey and the wind bitter. Nevertheless, I am standing at the top of St Mark’s Hill in Surbiton waiting for writer, poet and all the sins contributor Lucy Furlong to take me for a walk.

Lucy is – among many other things – a psychogeographer whose two poetry maps, Amniotic City and Over the Fields, invite the reader to walk with her along London streets and across the fields of her childhood. By laying her poems out in map form, reading becomes an active experience. It is as much a discovery of place as it is a discovery of how she feels.

Lucy’s love of place began at a very early age – her favourite spot was a patch of ground between two hedges at the end of a shared garden. As a child, she was obsessed with Peter Pan and Mary Poppins and the garden became her magical place. “I was very much caught up in my own head about what was really happening there,” she says.

The love of maps came in adulthood, after her parents bought her a Times Atlas as a birthday present. “As soon as I got it, I started looking at places where friends were travelling, and poring over the pages. Then, Amniotic City was borne out of wanting to write about all these places that I knew. A map felt like a really versatile way of presenting the poems. It’s got a different dynamic to it.” 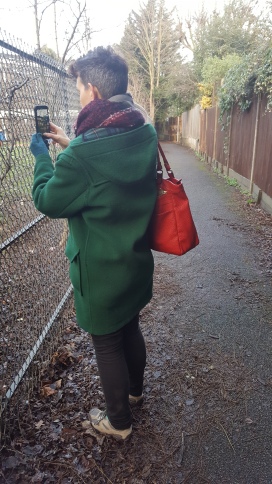 It was when Lucy went back to university to study journalism and creative writing that she began to realise that some of her favourite pastimes – wandering the streets, researching a place and writing about it – had a formal name: psychogeography.

The term was coined in 1955 by Guy Debord – author of The Society of the Spectacle – and it describes the effect that a particular geographical location can have on our emotions and behaviour. Debord was a founding member of the avant-garde movement known as Situationist International and emphasised playfulness and the idea of ‘drifting’ – known as a dérive – around urban environments in order to re-examine our response to architecture and space.

“The first piece of writing that I did when I went back to university at 38 was a psychogeographical drift,” says Lucy, “although at the time I didn’t know that was what it was. I went for a walk around some of my haunts in London, places I’d played gigs and where things had happened to me. So, I started to investigate it a bit more.”

Our walk today is not strictly a drift. We have a specific destination – Villiers Path – and a purpose – Lucy is planning a new piece of poetry and visual art to be displayed as part of the local Museum of Futures’ Visual Poetry Exhibition, taking place in March. Nevertheless, our journey incorporates two key elements of pyschogeography – playfulness and exploration.

This ribbon of tarmac is really a short, inconspicuous track that cuts between a school and some houses. A blink-and-you’ll-miss-it sort of destination that probably began life as a holloway – a route, worn down by humans, that drops below the natural surface of land to leave tree roots exposed. Different, as I discover, from a ‘desire path’, which is usually a muddy line through grass where people have taken a short cut.

But, this unassuming spot hides a grander history. In 1648, Lord Francis Villiers was killed in a key battle of the English Civil War. That Surbiton had anything to do with such a significant part of English history takes most people – locals included – by surprise. If people have heard of the area at all, it is as the location for the 1970s television show The Good Life.

Lucy’s psychogeographic ears pricked up when she first heard the story of the battle, and she has been wanting to visit the path ever since. She has also discovered, through her research, that the Villiers coat of arms includes scallop shells – the symbol of the pilgrim. “I’ve got all sorts of ideas about what I want to do with this place, but one thing that I have decided,” she says of her new work, “is that this is a pilgrimage site.”

The purpose of coming is to get a feel for the place, to see it up close, to notice. And in noticing, Lucy is able to start blending carefully researched historical fact with the playfulness that is so central to the concept of psychogeography.

For all its history, this is an ‘inbetween’ place, one in which Lucy’s imagination can run riot. “It’s not the sort of place you’d normally hear someone say ‘hey, let’s go down Villiers Path’. That’s why I’m interested. Partly it’s about wanting people to know that something happened here. But, it’s also a place that I look at and think ‘we can have fun with this, fill this space with stories. Reclaim it’.”

And, despite the weather, I am enjoying myself. We stop every now and then to take some photos that will help remind Lucy of what she has seen, to discuss the abundance of ivy and how long a compost heap has been there. Soon, though, we reach the end of the downward-sloping path and stop again, this time to wonder how the large house at the bottom came to be the site of the International Co-Freemasonry for Men and Women.

“Why is it here?” asks Lucy. “There must be some mystical resonance for this pilgrimage site of mine. It might end up in this poem, which would give me the chance to talk about access. Laura Oldfield Ford is amazing for that. She’s a punk psychogeographer artist, more on the visual arts side, but her writing is fantastic as well. Often, when she walks, she gets groups of people to go with her and it can involve crossing sites that are abandoned or contentious in some way.”

We don’t hang about for long; the January wind is starting to nip at noses and fingertips. Besides, we have a return journey to make, back up our mystical path. “It’s always worth going back the way you came,” says Lucy. “It gives you new perspectives. When I was writing Over the Fields, I walked that area over and over again.”

She’s right. On our return, I find a ‘river’. It’s a dribble really, complete with empty cigarette packet, but Lucy makes infectious ‘ooohing’ sounds and I think I’m starting to understand this, how noticing even the simplest aspects of the world around me can be shaped according to my imagination.

It takes Lucy and I less than half an hour to walk down and back up Villiers Path and by the time we reach the top again I am feeling the sense of reclamation that she has talked about. Even nature is at it – right at the top, we notice that the tarmac is rippling where nearby tree roots have grown and spread underneath it.

And, then, as we stand under the path signpost for a moment, so that I can take a photograph, it starts to snow. Despite both of us carrying hacking coughs we begin leaping about like children. ‘That’s going in the poem,’ says Lucy.

Lucy Furlong is a writer and walking artist. Her poetry map, Amniotic City, was featured in The Guardian and her pamphlet , clew, was published by Hesterglock Press in 2015. Her latest poetry map, Over the Fields, was published in September 2015. www.lucyfurlong.com. You can buy a copy of Villiers Path: Scalloped Time via the Sampson Low website.